skip to main | skip to sidebar

Jamila throttles into the lobby of the library; there is blood in her eyes, which forces her to squint deep.
She wants the name of the motherfucker that told her mother the only place she can work is Dollar Tree.
She wants his name, his motherfucking badge number, and the FICO score of his old lady.

I tell her I am the motherfucker she is looking for, which comes out all wrong (I don't clinch the emphasis).
But, that I never would have told her mother the only place she can work is Dollar Tree. I tell her, I told her.
I told her that the only place that might accept papers applications in this neighborhood is Dollar Tree or Family Farms.

Jamila in a NY JETS jersey and sparkly sandals; Jamila, tough customer on a vendetta query, looking through motherfuckers.
Jamila, all employers force applicants to pilot their websites, so they can assess their protocol-pulse and proclivities.
Jamila, I would like nothing more than to be the motherfucker that helped your mother get a job, but I can't.

Bring her to my computer class on Wednesdays so she can learn some new skills and come hang out in the air conditioning with us.
Jamila, libraries love your mother, libraries love mothers in general, libraries are full of motherfucking mother-lovers, Jamila.

Cavity, After Death, 2017
by Jesús Aldana-Alba 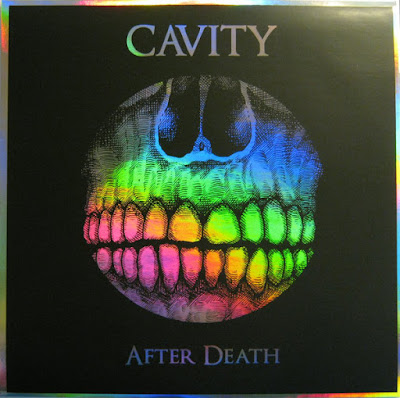 This is ugly music for ugly people with ugly friends who like it that way. Now, I’d never heard of Cavity before being asked to review this album, so, I’m not going to be comparing it to any of their past efforts.

I’ll start by saying that, “After Death” is reminiscent of so many other records that have done that sound well. Nonetheless, it is far from a mediocre endeavor. Whereas Sleep is heavier; Neurosis more intellectual; Boneworm, more psychedelic; and, Sub Rosa and Pallbearer, more elegant, Cavity’s latest is as reliable as winter rust.

By the 3rd track “Fangs On Beyond” the album begins to sound exactly like what you might guess it sounds like from the title: a couple of bare, mid-paced, super-aggressive tracks that pound away on heavy, dirty distortion-drenched guitars and vocals, exemplified on side 1, for example, by tracks like “Scalpel A.D. and Neanderthal.”

The vocals are captivating throughout though; they do have a very scratch-your-eyes-out sort-of feel to them. And the lyrics - what I could make out of them, anyways - are thoughtful


The cymbal work on the first track gives it a bit of Industrial flavor, at first; then, the track gives way to a slow, bluesy churn that makes one want to get ink. “Neanderthal” starts to feel like an unfolding, of sorts. Maybe, it’s the slight wobble between the instruments, as if the time signature is just a suggestion, but, this unmooring ends up working in Cavity’s favor.

I imagine that if you could slow time down to a crawl, and be a fly on the wall inside of an Internal Combustion Engine, you’d hear the sounds of After Death’s side 1. After that roar, naturally, follows the paranormal rust and blues of side 2. If you’ve ever heard Neurosis’ Sovereign, (Cavity’s track) “Fangs” will sound familiar. It’s noisy and jarring and tribal--a bit Sci-Fi, too. The track scrapes across the sky like nails on a chalkboard (but we, that is my ugly friends and I, like a little pain here).

The album’s closer, is gold. “Collision” is so sparse, at first, that it feels quiet, despite it being loud, as loud as an unexpected thrah-rattling while walking alone in the desert. The percussion is adroit. And the vocals - THE VOCALS!!! - they go from sweet and delicate to reckless, ebullient hooting, like Michael Jackson at a Mr. Bungle hostage situation.

All in all, After Death is a very satisfying record, perfect for drowning out unruly neighbors while you solder cables or cycling through your yoga routine. Personally, After Death has a meditative quality you might want to blast while you slap some glue on some art, which if you think about it might be the highest compliment one could pay to a band.

Spicaro
Mar Vista, Los Angeles, CA, Southern California, United States
The title of this web blog is a neologism created by Yago S. Cura: a compound of the derogatory word for Latinos, "spic," and the Spanish literary tradition, "Picaresque," from which the modern novel descends. Yago's poetry has appeared in Lungfull!, Borderlands, COMBO, LIT, U.S. Latino Review, PALABRA, Exquisite Corpse, Field, Slope, and The New Orleans Review. Yago's reviews have appeared in The St. Mark's Poetry Project Newsletter. In 2008, Yago was one of many narrators of the "Human Resources" episode of National Public Radio's "This American Life" that highlighted the NYC/DOE's gulag for alleged-against teachers: the Rubberroom. Yago's poetry manuscript, Spicaresque, was a finalist in the National Poetry Series and the Andres Montoya Poetry Prize.